In his State of the Union address in September 2017, European Commission President Jean-Claude Juncker stated that “People who have no right to stay in Europe must be returned to their countries of origin. When only 36 per cent of irregular migrants are returned, it is clear we need to significantly step up our work. This is the only way Europe will be able to show solidarity with refugees in real need of protection.’

We are in the midst of a profound “returns first” shift in migration politics. Arrivals to Europe have dropped dramatically since 2015. The priority of the European Union now is to increase the rate of return of irregular migrants to countries of origin or transit.

However, overall, while the number of orders to leave issued by EU Member States to third country nationals between 2008 and 2017 has remained relatively constant at about half a million a year, the number of returns actually implemented has trailed behind at a yearly rate of 200,000, even decreasing over the past two years.

Furthermore, the official figures do not indicate whether these were sustainable returns.

The Commission has therefore decided to revise its so-called ‘Return Directive’ from 2008 which establishes common standards and procedures for the return of non-EU nationals without a legal right to stay in the EU.

It is within this context that a delegation of the OSCE PA’s Ad Hoc Committee on Migration travelled to Brussels on 2 April for briefings on the current status of the discussions on how to increase the effectiveness of returns within the European Commission and Parliament.

We also met with representatives of international governmental and non-governmental organizations to hear their views and discuss general principles which should underpin an effective and humane return policy.

We also used this opportunity to learn more about Belgium’s return policy and visited a closed return centre which, since August 2018, has included units for detaining families with children for a limited period.

Our discussions in Brussels in April as well as the Committee’s previous work on integration and field visits to Sweden and Denmark last October as well as an earlier visit to Belgium in 2018 motivated the drafting of the resolution which we are debating today.

I wish to thank the members of the Ad Hoc Committee as well as all those who supported this resolution and who proposed the three amendments.

I would like to emphasize that the question of returns is relevant not only for the Member States of the European Union but also for the OSCE region more generally.

Acknowledging the difficult decisions which must be made, as well as recognizing the need to increase the rate of effective returns, this resolution urges OSCE participating States to do so through the development and implementation of a sustainable, dignified and effective return policy. It also puts forth a number of recommendations on how to achieve this objective.

At the same time, it highlights the importance of pursuing comprehensive integration policies to ensure that those who are granted the right to stay are fully integrated with a view to building inclusive societies to the benefit of both migrants as well as the receiving societies.

Here are some key elements of an effective and humane return policy:

(1) Persons not entitled to asylum must be returned with dignity, with full respect for their fundamental rights and freedoms as well as for the principle of non-refoulement. International law dictates that we cannot return migrants to countries in war or to situations where they would be subjected to torture or inhuman or degrading treatment or punishment. We need to seriously question whether, under current conditions, it is safe to return irregular migrants to Libya.

(2) Returns should be based on the principle of ‘voluntary if possible, forced if necessary’. Voluntary return is not only more dignified, but also less expensive and, when accompanied by reintegration assistance, more likely to be sustainable in the long term.

The resolution calls upon States to expand their support for assisted voluntary return and reintegration programmes such as those implemented by the International Organization for Migration.

(3) A number of the recommendations are aimed at minors and ensuring that the best interests of the child are given primary consideration. It calls for an end to the practice of family separation and deportation of parents without their children. It appeals to states to always implement alternatives to detention in the case of unaccompanied minors and to prioritize such alternatives in the case of families with children. It also urges States to consider allowing children to finish the school year before being returned.

(4) The resolution stresses the importance of ensuring a clear link between asylum decisions and return procedures through swift notification of the outcome of the asylum application or appeal as well as the consequences of the decision and options available.

(5) It reiterates the need for OSCE participating States to harmonize their lists of ‘safe countries of origin’ which trigger swift removals.

(6) Last but not least, it emphasizes the importance of adopting effective return monitoring systems to ensure that the principle of non-refoulement has not been breached as well as evaluation systems through the collection of disaggregated data on forced and voluntary returns in order to assess the sustainability of returns.

(7) The resolution also emphasizes the importance of multi-stakeholder involvement and the participation of local government actors in particular in the design, implementation and evaluation of integration policies.

(8) It also encourages OSCE States to exchange examples of ‘good practice’ in the area of returns as well as integration and to make use of the expertise of the OSCE’s Office for Democratic Institutions and Human Rights (ODIHR).

In conclusion, let me link to the theme of this year’s Annual Session by referring to Sustainable Development Goal Number 10 on reducing inequalities and in particular target 10.7 on facilitating “orderly, safe, regular and responsible migration and mobility of people, including through implementation of planned and well-managed migration policies”.

An essential means of achieving this target is through the development of effective migration policies based on promoting inclusive societies and dignified returns. I therefore call upon the Assembly to adopt this resolution.

Thank you for your attention. 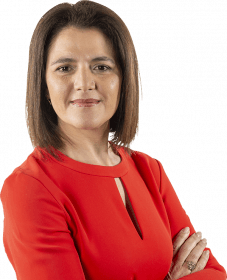